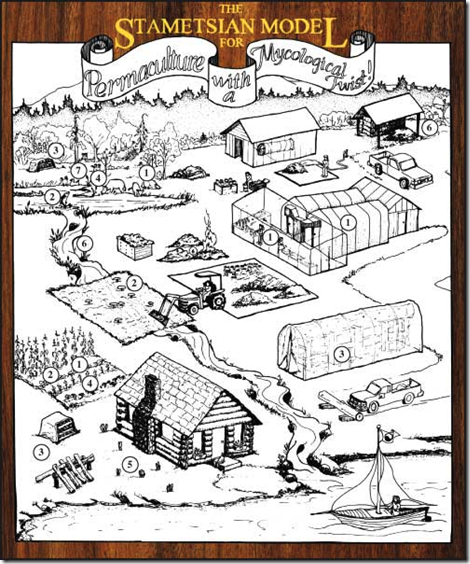 1. Oyster Mushrooms
Oyster mushrooms can be grown indoors on pasteurized corn stalks, wheat, rice, & rye straw and a wide range of other materials including paper and pulp by-products. Soaking bulk substrates in cold water creates a residual «tea» that is a nutritious fertilizer and potent insecticide. Submerging the bulk substrate in hot water produces a different brew of «tea»»: a naturally potent herbicide. Oyster mushrooms can also be grown on hardwood stumps and logs. (Some varieties of Oyster mushrooms in P. pulmonarius species complex naturally grow on conifer wood.) Pleurotus thrive in complex compost piles, and are easy to grow outside with minimum care. The waste substrate from Oyster production is useful as fodder for cows, chickens, & pigs. Since half of the mass of dry straw is liberated as gaseous carbon dioxide, pumping this CO2 from mushroom growing rooms into greenhouses to enhance plant production makes good sense. (Cultivators filter the airstream from the mushroom growing rooms so spores are eliminated.) Furthermore, the waste straw can be mulched into garden soils, not only to provide structure and nutrition, but also to reduce the populations of nematodes which are costly to gardeners and farmers.

2. King Stropharia
This mushroom is an ideal player in the recycling of complex wood debris and garden wastes, and thrives in complex environments. Vigorously attacking wood (sawdust, chips, twigs, branches), the King Stropharia also grows in wood-free substrates, particularly soils supplemented with chopped straw. I have seen this mushroom flourish in gardens devoid of wood debris, benefiting the growth of neighboring plants. Acclimated to northern latitudes, this mushroom fruits when air temperatures range between 60-90° F (15-32° C) which usually translates to ground temperatures of 55-65° F (13-18° C).

For 6 weeks one summer our bees attacked a King Stropharia bed, exposing the mycelium to the air, and suckled the sugar-rich cytoplasm from the wounds. A continuous convoy of bees could be traced, from morning to evening, from our beehives to the mushroom patch, until the bed of King Stropharia literally collapsed. When a report of this phenomenon was published in Harrowsmith Magazine (Ingle, 1988), bee keepers across North America wrote me to explain that they had been long mystified by bees’ attraction to sawdust piles. Now it is clear the bees were seeking the underlying sweet mushroom mycelium.

King Stropharia is an excellent edible mushroom when young. However, its edibility quickly declines as the mushrooms mature. Fly larvae proliferate inside the developing mushrooms. In raising silver salmon, I found that when I threw mature mushrooms into the fish-holding tank, they would float. Fly larvae soon emerged from the mushrooms, struggling for air. Soon the fish were striking the large mushrooms to dislodge the swollen larvae into the water where they were eagerly consumed. After several days of feeding mushrooms to the fish, the salmon would excitedly strike at the King Stropharia in anticipation of the succulent, squirming larvae as the mushrooms hit the water. Inadvertently, I had discovered that King Stropharia is a good base medium for generating fish food.

Growing King Stropharia can have other beneficial applications in permaculture. King Stropharia depends upon bacteria for growth. At our farm which included a small herd of Black Angus cows, I established two King Stropharia beds at the heads of ravines which drained onto a saltwater beach where my neighbor commercially cultivates oysters and clams. Prior to installing these mushroom beds, fecal coliform bacteria seriously threatened the water quality. Once the mycelium fully permeated the sawdust/chip beds, downstream fecal bacteria was largely eliminated. The mycelium in effect became a micro-filtration membrane. I had discovered that by properly locating mushroom beds, «gray water» run-off could be cleaned of bacteria and nitrogen rich effluent. Overall water quality improved. Massive mushrooms formed. After three to four years, chunks of wood are totally reduced into a rich, peat-like soil, ideal for the garden. For nearly 8 years, I have continued to install King Stropharia beds in depressions leading into sensitive watersheds. Government agencies, typically slow to react to good ideas, have finally recognized the potential benefits of mycofiltration. Test plots are currently being implanted and monitored to more precisely determine the effects on water quality. If successful, I envision the widespread installation of King Stropharia beds into basins leading into rivers, lakes, and bodies of saltwater.

3. Shiitake/Nameko/Lion’s Manes
Outdoors, inoculated logs can be partially buried or lined up in fence-like rows. Once the logs have stopped producing, the softened wood can be broken up, sterilized, and re-inoculated. Indoors, these mushrooms can be grown on sterilized substrates or on logs using the methods described in this book. Once the indoor substrates cease production, they can be recycled and re-inoculated with another mushroom, a process I call species sequencing. (See Chapter XXII.) Later, the expired production blocks can be buried in sawdust or soil to elicit bonus crops outdoors.

4. Maitake/Reishi/Clustered Woodlovers
Several species can be incorporated into the management of a sustainable multi-stage, complex Medicinal Mushroom Forest. Logs can be inoculated and buried or stumps can be impregnated. The greatest opportunities for stump culture are regions of the world w here hardwoods predominate. Presently, only a few gourmet and medicinal mushrooms grow on coniferous woods. Nevertheless, Enokitake (Flammulina velutipes), Reishi (Ganoderma lucidum), Clustered Woodlovers (Hypholoma capnoides), Chicken-of-the-Woods (Laetiporus sulphureus), and Oyster (Pleurotus spp.)are good candidates for both conifer and hardwood stump decomposition.

5. Shaggy Manes
A cosmopolitan mushroom, Shaggy Manes (Coprinus comatus) grow in rich manured soils, disturbed habitats, in and around compost piles, and in grassy and gravel areas. Shaggy Manes are extremely adaptive and tend to wander. Shaggy Mane patches behave much like King Stropharia and Morels, travelling great distances from their original site of inoculation in their search for fruiting niches.

6. Morels
Morels grow in a variety of habitats, from abandoned apple orchards and diseased elms to gravelly roads and stream beds. However, the habitat that can be reproduced easily is the burn-site. Burn-sites, although increasingly restricted because of air pollution ordinances, are common among country homesteads. If a burn-site is not possible, there are alternatives. The complex habitat of a garden compost pile also supports Morel growth. When planting cottonwood trees, you can introduce spawn around the root zones in hopes of creating a perennial Morel patch. Cultivators should note that Morels are fickle and elusive by nature compared to more predictable species like King Stropharia, Oyster and Shiitake mushrooms.

7. Mycorrhizal Species
Mycorrhizal species can be introduced via several techniques. The age-old, proven method of satellite planting is probably the simplest. By planting young seedlings around the bases of trees naturally producing Chanterelles, King Boletes, Matsutake, Truffles or other desirable species, you may establish satellite colonies by replanting the young trees after several years of association. For those landowners who inherit a monoculture woodlot of similarly aged trees, the permaculturally inclined steward could plant a succession of young trees so that, over time, a multi-canopy forest could be re-established.

8. The Sacred Psilocybes
In the Pacific Northwest of North America, the Psilocybes figure as some of the most frequently found fungi in landscaping bark and wood chips. These mushrooms share a strong affinity towards human activities -from chopping wood, the planting of ornamentals, landscaping around buildings, to the creation of refuse piles. Many spiritually inclined cultivators view the establishment of Sacred Psilocybe Mushroom Patches as another step towards living in harmony within their ecosystem.

These are but a few mushroom species that can be incorporated into the permaculture model. Part of a larger, community-based permaculture strategy should also include Mushroom Response Teams (MRT’s) which could react quickly to catastrophic natural disasters such as hurricanes, tornados, floods in the profitable recycling of the enormous debris fields they generate.

Clearly, the use of mushrooms energizes permaculture to a level otherwise not attainable. I hope readers will develop these concepts further. When fungi are incorporated into these models, the ecological health of the whole planet will benefit enormously.